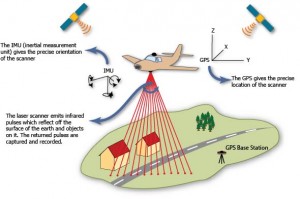 Airborne laser scanning, also commonly known by the acronym LiDAR (Light Detection And Ranging) is an active remote sensing technique, used to record the surface of the earth, specifically the topography of large areas of terrain and objects on appearing on it. The earliest lidar remote sensing systems were used by NASA in the 1970s for mapping in the ice covered Arctic and Antarctic areas (Krabill et al. 1984), but in spite a of a number of research projects in remote sensing during the late 1970s and 1980s, adoption in disciplines outside geomatics did not occur until the 1990s. The popularization of lidar across disciplines including geography, geology, forestry, archaeology, natural resource management, and urban planning occured in the late 1990s and early 2000s and the development of lidar is considered by many to represent the main advance in airborne remote sensing and terrestrial survey in this period.

In addition to providing dense data across large areas of open terrain, lidar is distinguished from other remote sensing technologies by it’s ability to provide data from terrain and objects under forest canopy. As a lidar sensor is flown over a forested, woodland or scrub landscape area some returns will penetrate the vegetation canopy, reach the ground, and return to be recorded by the sensor- effectively allowing the creation of terrain models as ‘seen through trees’.

CAST collaborates with the Arkansas NCRS on the Bayou Meto Lidar Survey.

You can read about the basics of lidar processing for this project in this series of posts.

CAST has a strong tradition of work in archaeological geomatics. You can also read about lidar applications in archaeology here.